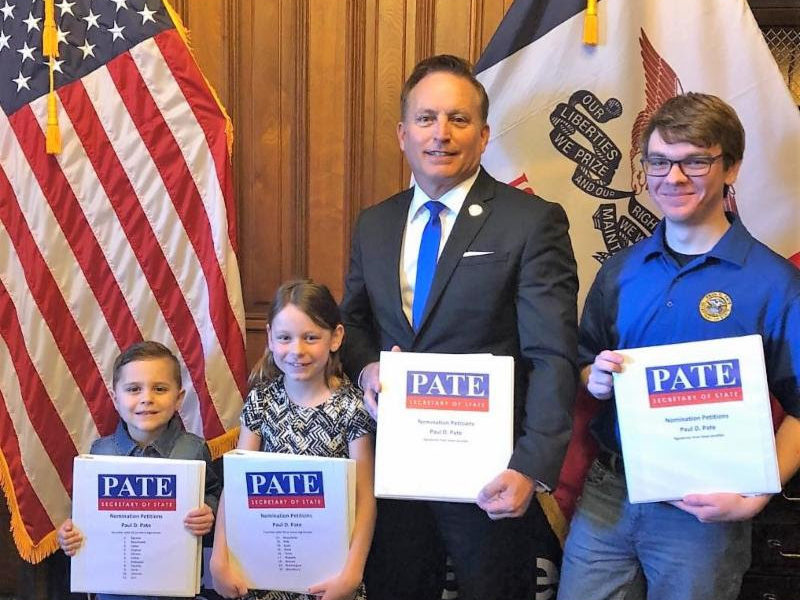 By wordpress@victoryenterprises.com | March 14, 2018 | News | No Comments
DES MOINES – Iowa Secretary of State Paul Pate officially filed his nomination papers for the 2018 election on Wednesday. Pate’s petitions included signatures from Iowans in all 99 counties, signifying his campaign has already built a strong, statewide grassroots network.
“It has been a huge honor to serve as Iowa’s Secretary of State and the voters in all 99 counties have indicated they support what we have accomplished the past three years,” Secretary Pate said. “Iowans indicated they wanted voter ID when they elected me in 2014. Every poll shows strong support for voter ID, and I worked hard to deliver on that campaign promise, while also working to modernize Iowa’s election technology. Election integrity means more than checking ID’s at the polls. It means ensuring clean and fair elections across Iowa and that’s where I will keep my focus.”
Pate’s accomplishments during his current tenure include national recognition for his Iowa Youth Straw Poll and the “Helping Veterans and Iowans with Disabilities Vote” initiative. Pate instituted online voter registration in Iowa in 2016, and his innovations resulted in the highest voter registration total in state history.
“I will continue to work every day to serve the people of Iowa,” Pate said. “Whether it’s the Safe at Home program, the College Voter Engagement Summit, or instituting Fast Track Filing, my team is dedicated to the business community and the people of Iowa. We will strive every day to make it easy to vote, but hard to cheat, and offering service at the speed of business, not the speed of government.”
Paul Pate has dedicated his life to public service. He is a former State Senator, Mayor of Cedar Rapids, and President of the Iowa League of Cities. Pate is currently the Treasurer for the National Association of Secretaries of State. Paul was born and raised in Iowa. He and his wife Jane are parents of three and grandparents of five.