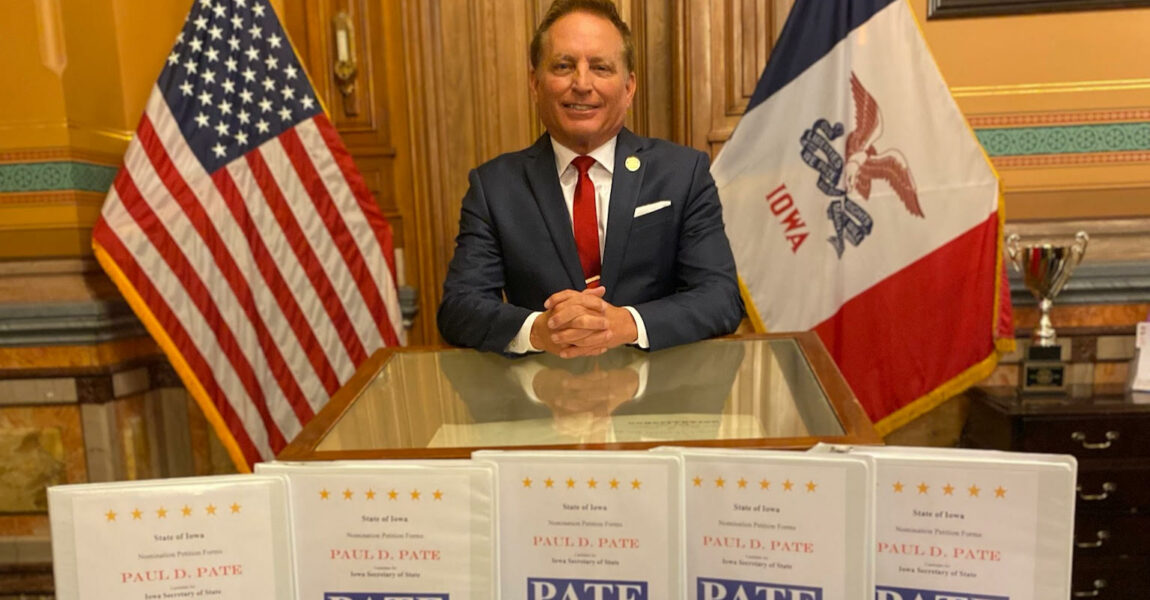 By wordpress@victoryenterprises.com | March 8, 2022 | News | No Comments

Click here for a video message from Secretary Pate

Click here for an audio message from Secretary Pate

DES MOINES – Iowa Secretary of State Paul Pate announced his bid for reelection on Tuesday. Under Pate’s leadership, Iowa has set record highs for voter registration and participation while ensuring the integrity of the vote.

Pate is seeking his fourth term as Secretary of State. He submitted his candidate filing Tuesday, with more than 7,250 signatures and support in all 99 counties.

Paul Pate followed through on his 2014 campaign promises to bring Voter ID to Iowa. He wrote Iowa’s Voter ID laws and has defended them successfully in court multiple times.

Pate is also a nationally recognized leader among election officials. He was unanimously chosen as President of the National Association of Secretaries of State (NASS) in 2019.

Pate’s efforts to ensure Iowa’s election cybersecurity is protected in all 99 counties earned him the 2019 NASS IDEAS Award. He has also received two awards from the U.S. Election Assistance Commission for improving voter accessibility for Iowans with disabilities.

“Election officials are the referees. We don’t wear team jerseys. I promised Iowans I would make it easy to vote, but hard to cheat in Iowa and the numbers speak for themselves. Since implementing Voter ID, we’ve had record-high turnout in four elections,” Pate said. “We also adopted post-election audits, that ensure the vote count is accurate. Because of the reforms we put in place, Iowans can be confident in the sanctity of their vote.”

Pate also followed through on his promises to create an online voter registration system and a Safe at Home address confidentiality program for Iowans.

“Survivors of domestic violence, sexual abuse, trafficking, stalking, and assault can live without fear of their address becoming public record because of Iowa’s Safe at Home program. More than 1,200 Iowans are safer today because of the reforms we put in place,” Pate said.

Secretary Pate has also modernized Iowa’s business filings process. The filing time for a new business has been greatly reduced under Pate’s leadership. A task that used to take a few weeks is now done within one business day.

Paul Pate is a nationally recognized owner of a small business. He previously served as a state senator, mayor of Cedar Rapids, and president of the Iowa League of Cities. Pate and his wife Jane reside in Cedar Rapids. They have three children and five grandchildren.